The chemical industry has depended on fossil materials for over 100 years. This changes with Perstorp and Project Air.

Project Air will reduce carbon dioxide emissions by 500,000 tons per year, which corresponds to cutting Sweden's carbon emissions by 1 percent. This is possible by replacing conventional methanol with sustainable methanol.

Strong impact on value chains all the way

As much as 96 percent of everything that is produced needs chemicals. This means that when chemical products become more sustainable, so do most other industries and products. Consequently, the chemical industry is a crucial player in tackling the climate crisis. The transformation of Perstorp and the chemical sector will have far-reaching effects in many value chains.

Perstorp will build a Carbon Capture and Utilization (CCU) plant in Stenungsund, Sweden that will convert carbon dioxide emissions captured from Perstorp’s operations as well as other residue streams, biogas and renewable hydrogen to methanol. Renewable hydrogen will be supplied by a world class hydrogen electrolysis plant which will be set-up by Fortum and Uniper. 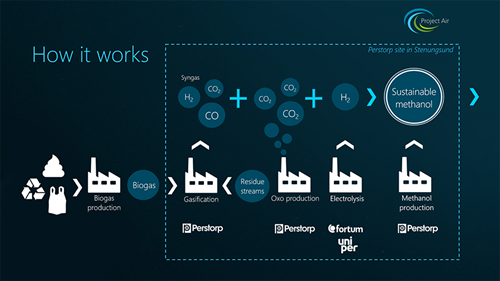 Project Air will substitute all 200,000 tonnes of fossil methanol used by Perstorp each year in Europe as raw material for chemical products.

Project Air has the potential to transform the chemical industry. It can happen now.

All forces are needed to boost sustainable production and its competitiveness, including in the chemical industry. Consequently, Perstorp and Project Air welcome the European Commission’s Fit for 55 package of legislative proposals.

Project Air will contribute substantially to the Fit for 55/Green Deal policy objectives. It will enable ground-breaking transformational changes in the chemical sector as follows:

With these qualities Project Air will specifically contribute to achieving the following targets and objectives:

Biogas is a key issue

Biogas is needed to produce sustainable methanol. The conventional alternative, fossil natural gas, is not an option in the green chemical industry.

Project Air can transform the chemical industry towards climate neutrality. This is possible in the very near future – but only with a steady supply of biogas for the project in Sweden. In the short term, Perstorp demand for biogas will double, from 1.5 TWh to almost 3 TWh per year. To meet the need of Perstorp and other industrial users,  biogas production in Sweden must increase from today's approximately 2 TWh to over 10 TWh. In the longer term, even more is needed.

Functioning market for industrial use of biogas

Sweden's sustainable industry requires a functioning market for biogas. Production needs to increase, and the industry must be recognized as a significant user of biogas.

The electrification of transport opens up new outlets for biogas. This is a great opportunity for all biogas producers. When used in the industry, biogas can become part of renewable chemical products used in thousands of applications that are functional for many years, as the chemical industry needs the carbon molecules from the biogas to use as building blocks.

To function properly, the market for biogas for industrial use needs a level playing field. The current subsidy structure discriminates industrial use of biogas as a raw material.

Sweden needs predictable and competitive conditions as well as production support that is harmonized with that of other EU countries.

Project Air has the potential to transform a substantial part of Sweden’s basic industry. This requires stable supply of inputs at competitive prices. 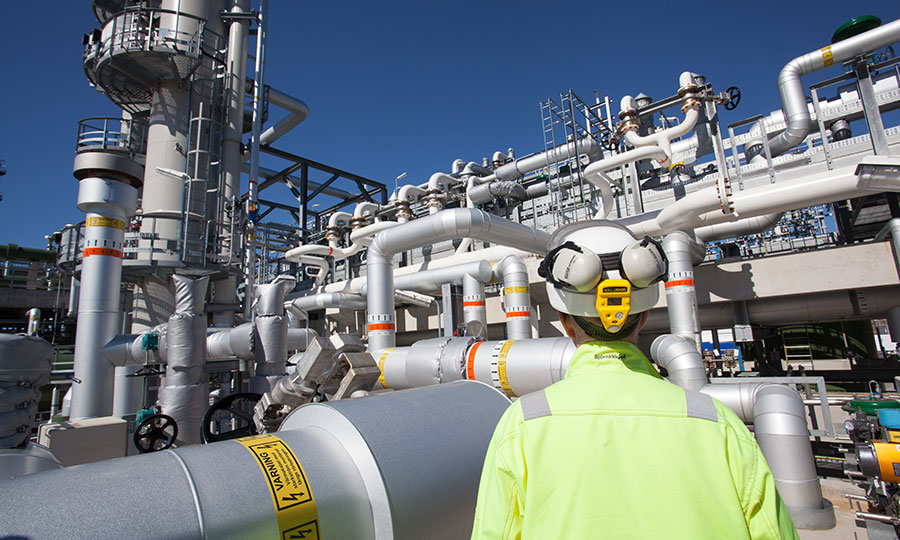